Flicking through a box of old ori-photos (real photos!) I found this nice shot from some time in the mid 90’s. I then had to digitise it in order to post here – it’s hard to remember the limitations of colour negatives given our amazing digital age. And to think I used to have my own darkroom, actually printing from negatives – how quaint is that?

Here’s a nice photo of my friend Anne, teaching at the BOS 40th anniversary convention in 2006. Her capacity for work is legendary, having been involved with setting up the OUSA website, maintaining the o-list (alongside Joseph Wu), she proofreads origami books, assists the Tanteidan with translation and helps prevent visitors to Japan (like myself) from making too big an ass of themselves.  She does all this (and much more) without ever seeking any recognition or reward. She’s also a dab hand with anything that floats and has been studying welding “for fun”. Anne sometimes “doesn’t get” my British humour, but she’s by no means alone in that – the list starts with my wife and daughter 😉

I’ve always liked this reflective shot of the esteemed Lord Brill, as he tries to figure out how to make the model of the carriage.

Kamiya-san in Japan, 2005, getting close to his subject…

This is just superb, right down to the choice of paper. Click the photo to go to the creator’s Flickr page… 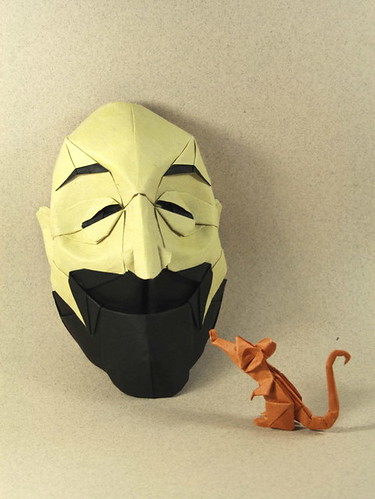 I love these postcards – if anyone sees any going cheap, please buy them for me & I’ll reimburse you…

In 1955, Yoshizawa sent several large boxes of his work to America for an exhibition. Some 50 years later, they were returned to their creator through the efforts of the BOS. I was lucky enough to see these first hand and to appreciate what an awesome touch the Master had. There are few folders even today who could put such life into their folding. Here’s an example (photo by Dave Brill)

Can you identify the two folders cunningly merged here?